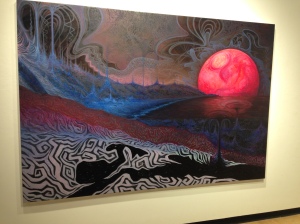 For week 13 I chose artwork from the gallery by Jeff Dula’s. It was very pretty and it had a look to it that would brighting up my day. I loved everything about this artwork! The colors reflected off very well. It was out of two art pieces that I wanted to chose from and this was the finally one I decided on. The art work needed to be somewhere else thats how pretty it was and how much I enjoyed it. ? When reading the artist statement about the art on the picture, what I thought about it did not change because I liked it anyway. The bright colors were me because thats what I like. I enjoyed this art a lot, I would consider it one of my favorites.

For week 13 I chose to interview Calvin. He was not very friendly but I tried my best to make it work. Calvin is a civil engineering major. He is a freshman here at California State University, Long Beach. He said so far it is okay, but he does not get to see much because he commutes and does not stay on campus for long. Calvin went to Cypress high school. He also lives and commutes from cypress. On his free time he likes to play volleyball, hiking, and swimming. He likes all kind of music. What I found out is that we both like to go to Disneyland on our free time.

Calvin and I did not find to much art that we both liked. We have different personalities so maybe that could have been the reason.

For week twelve we have to pick something we would like to teach people. I chose to show you guys how I make my shoes. Down below are just a few steps to what it takes for my work. In the picture below is one the fabulous shoe ideal I created. I like to make on my free time and for people. In the first photo below I am creating a cute design with sharp spikes. The spikes are not very sharp but if you are not paying attention they will catch you off guard and hurt. The second photo I am just putting a cute hello kitty patch on there. To apply these cute details I just use glue called E6000. These shoes are very easy and cute to make. 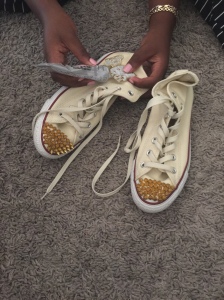 For week twelve I chose artwork by Timothy Cooper. First taking a look at this piece I thought maybe he was trying to make a cross with something that looks like plates. I found that the artwork was nice and different. Most of these art galleries are nice and unique and I just ask myself how did they come up with this idea? When reading the artist statement about the art the picture and there comments became more clear and I had a better understanding to what it meant. The author of the art said his art had something that means something? That statement I felt was a little unclear. In the art room I kept saying that quote and looking at the art, then I said okay I understand why he could say that about his art! He also said that his work shows how people work together like a team to create a positive outcome! Overall I enjoyed this art piece. 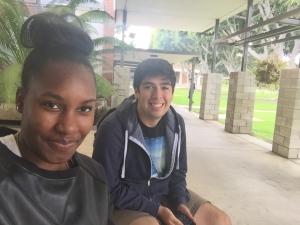 For week twelve I chose to interview Matthew Savedra. He is a freshman here at California State University of Long beach. So far he really likes the school and campus life. Matthew is originally from San Pedro, but now lives in Lakewood. He likes college way more then high school. He went to Mary Star high school in San Pedro. He lived in San Pedro and in the middle of the school year moved to Lakewood. I asked Matthew which one did he like better, he said San Pedro because he knew more people there. His major is Business management. He is undecided on what he wants to do with that broad major. He just knows for sure that he wants to explore different things in the world. On his free time he likes to hang out with friends. He played soccer from the age of five all the way to 8th grade. Going into high school he said he did not want to play soccer anymore. Matthew does not like art too much he just knew that he had to take it for a GE requirement. He loves to listen to the radio, alternative, and all bands. His favorite television show is American horror story. His favorite theme park is knots berry farm. Two major goals in life that he wants to complete is getting a good job and buying his own house!

For week eleven we had to choose our own activity to talk about. On my free time, which is rare I like to create things, such as clothes, shoes, activities, etc. anything that is creative! I just kept trying new things until I found my interest. Two years ago I finally found it, which is creating shoes. Down below are a few pictures of shoes I did for my clients. I felt like it was very creative and I just knew people would enjoy it! I post all my work on instagram. The first pair of shoes I posted people wanted to know how I did it, how to order it, and said how much they loved it! Every since then I knew that this would be the perfect idea for me. I still continue to work on shoes on my fall down time! I consider it a hobby and love it. If you have any questions feel free to follow me on instagram @sugaaarandspikes or my personal account @maaani. Feel free to also send me an email Imkamanii@Yahoo.com.

For week eleven I chose an art piece by Wesley Hicks. The art was different and something I had never seen before. I did not only choose this art because I liked it but also because I did not understand it until I read more about it. In my opinion it looked like the rock as dropped on to the building and as soon has it hit it begun to melt. But in reality it had a different meaning from reading about it. The photo had a meaning that really made you think about life. “ The act of presenting an object infers that there is an underlying knowledge about it within the act of presenting it.” In my opinion I feel like this means present yourself the way you really are when giving your first impression. You should always be yourself! 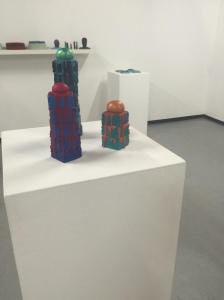 For week eleven I interviewed Cynthia Carrera. This is Cynthia’s first yea here at California State University, Long Beach. So far the school is lovely she said it has way more freedom than high school. Her major is going to be film. She likes to work on editing movies and hopes to work with marble one day. On her free time at school she likes to show people how to edit. She also feels really good to help a teacher edit something that may not have any idea of what they are doing. Before coming up with film major she wanted to work with engineering. In high school she would always tell herself that she wanted to be an engineer major. That did not work out to well! She had her mind on engineering for so long, when it was time to turn in the application she changed it to film. On her free time she likes to read manga and anima. Her favorite season or episode is techno. That episode is about turning yourself to evil! She speaks three languages, English, Spanish, and Italian. Next semester she will take on the course of Japanese. She has visited to places that she felt was interesting which is Vegas and Mexico. She also loves photography and taking photos.

The art that Cynthia and I chose was amazing! It was so unique and something I never seen before. Cynthia told me that I had great style and I could dress! When seeing this photo it reminded me of what she told me because I liked that style.

For this weeks activity we had to take a picture during the stage of our death. At first I found it a little hard but I begin to just start thinking of ways. First I thought maybe the day of halloween would be perfect then I thought no! The second time I thought about it was getting off of work. Work was very long this weekend so I thought okay maybe I could use this day for a picture. Wow, it really worked. In this photo I made myself look like I fell out. The hanging gave it more detail. This photo showed that I had a long day at work and I am just over whelmed with life!